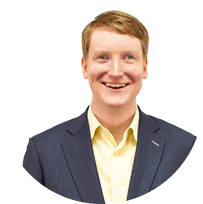 Corbb O'Connor thinks like an economist, writes like a journalist, scrutinizes new features of social media like an advertiser, and tries his best to raise his six-year-old like an Adlerian. A certifiable nerd, Corbb taught himself the web programming languages of HTML, CSS, PHP and MySQL so he could build a resource hub for webmasters in 1998. Before joining the Copenhagen-based software company Siteimprove as its Manager of Accessibility Testing, Corbb led the accessibility initiatives connected to U.S. Bank’s 2017 rebranding and 2018 Super Bowl campaigns. While studying Economics and Political Communication at The George Washington University, Corbb filed stories for the public-radio show Marketplace and member-station WAMU, led research projects for MSNBC's Chris Matthews, and interned on Capitol Hill. Corbb lives in Minneapolis with his son, is an amateur ham radio operator (callsign K0RBB), is trying to teach himself to padleboard, and is an experienced cowboy (yes, really).