Augmentative and Alternative Communication (AAC) encompasses every way we express our thoughts and feelings without using our voices. Technically speaking, we all use a form of AAC every day with our nonverbal communication when we use facial expressions or gestures instead of spoken words. This type of AAC is referred to as unaided systems because people do not need anything but their own bodies. An aided system uses some sort of tool or device. An example is children passing notes in class using a pencil and paper as tools.

I was born with cerebral palsy, a neurological condition that affects my ability to use my hands, walk, and speak. Throughout my life, I had to figure out ways I could get my point across without using my verbal voice. Read on to learn how AAC devices help break down these communication barriers for people with severe speech disabilities.

We may not realize how often we communicate without speaking and utilize a form of AAC. However, people like myself who have a severe speech disability need AAC to make communication possible by an aided system. The two types of aided systems are low-tech and high-tech. A couple of examples of low-tech systems are: writing a message with a pen and paper or pointing to letters, words, or pictures on a board to form sentences. Selecting letters or icons on a computer screen that speaks for you is a high-tech aided system or a speech-generating device (SGD). 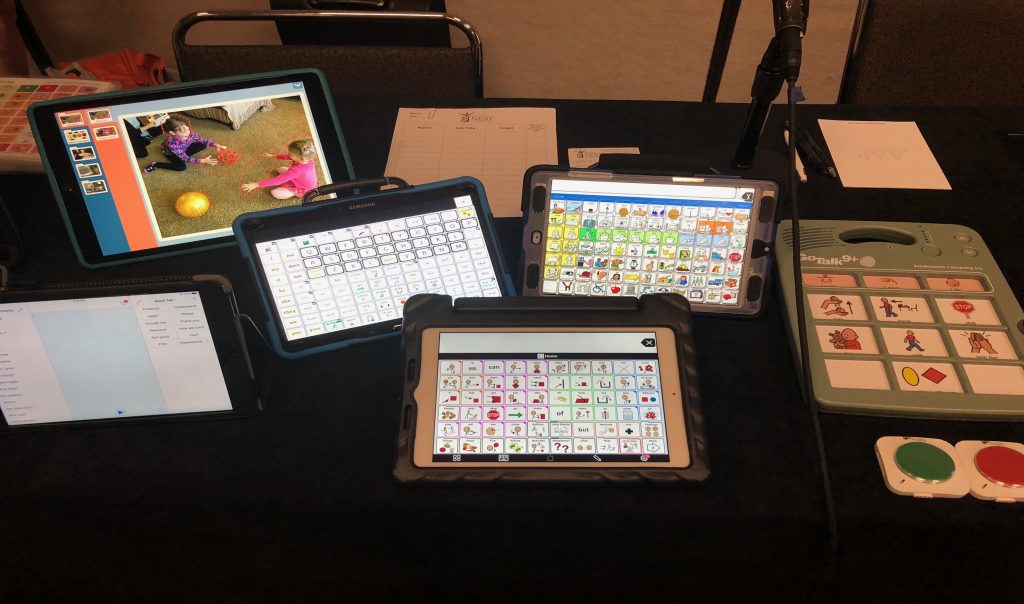 There are a handful of SGD manufacturers and each device has multiple access methods to accommodate different abilities. Higher functioning individuals who are able to use their hands can select buttons on their touch screens with their fingers. Others have very limited control over their bodies and may use a method known as scanning. This method is utilized by pressing a switch or button when the desired location on the screen is highlighted. A cursor highlights each location one at a time. There are others who cannot move any part of their body except for their eyes. They use the eye gaze access method. With eye gaze, a sensor is attached to the bottom of the device which reads eye movement and moves a pointer on the screen to make selections.

My SGD is called an Accent 1400 which is manufactured by the Prentke Romich Company and doubles as a Windows tablet. The access method I use on my Accent is the Tracker, also known as a head mouse. I operate my device with a little silver dot on my glasses that reflects light into a camera which moves the pointer on my screen. I have to hold the pointer still for a second to make a selection. 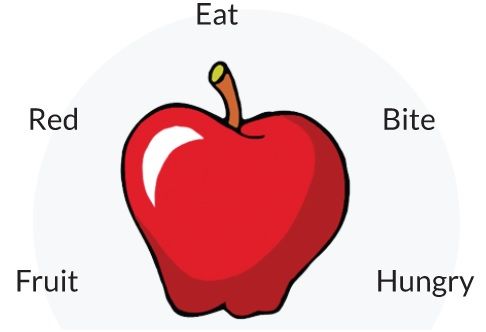 All of the devices made by the Prentke Romich Company have a language system known as Minspeak, which stands for minimal effort to speak. Minspeak is a system that represents language through a unique set of pictures, called icons. When you look at a picture of an apple you will commonly associate multiple concepts to that apple. People usually think of the most obvious concept first: an apple. But then they start thinking of more concepts such as: “fruit,” “red,” “eat,” “bite,” and “hungry.” Minspeak is based on this idea of using a small set of pictures to represent a large number of words.

Communicating using this system is fast because I can form words or phrases with two or three icon sequences instead of typing one letter at a time. Minspeak is so powerful because one icon can represent multiple words and a finite number of icons can be used. Below is an example of this concept of how the Apple icon can formulate different words just by changing one icon in the sequence.

Icons sequences can be strung together to generate sentences. If I spoke “I want a bite to eat. I’m hungry,” one letter at a time it would be twenty-six selections, including the spaces. However, when I use Minspeak I can say the same sentence with only twelve selections instead of twenty-six. This is both faster and also uses less energy and effort. This matters because communication should be achieved effortlessly. The sequence would look something like this:

Wrapping it Up: Why Accessible Coding Matters

I am lucky to live in this modern day of technology where there are devices like my Accent that make the lives of people with disabilities easier. It is awesome that there are so many AAC devices with different access methods to accommodate different abilities. Not being able to communicate effectively is frustrating, but with my Accent I can communicate with anybody anytime I want. With the addition of Minspeak I can talk about as fast as the average person.

As we work towards building a more inclusive world, we realize that some accessibility solutions may take longer to implement. We know that sound coding practices and attention to accessibility at the beginning stage of a project go a long way in ensuring that products work for everyone regardless of disability. When programs are designed to work via keyboard interaction, AAC devices can interact with them. Experience shows that when apps are designed with accessibility in mind, users have greater freedom to participate in society.