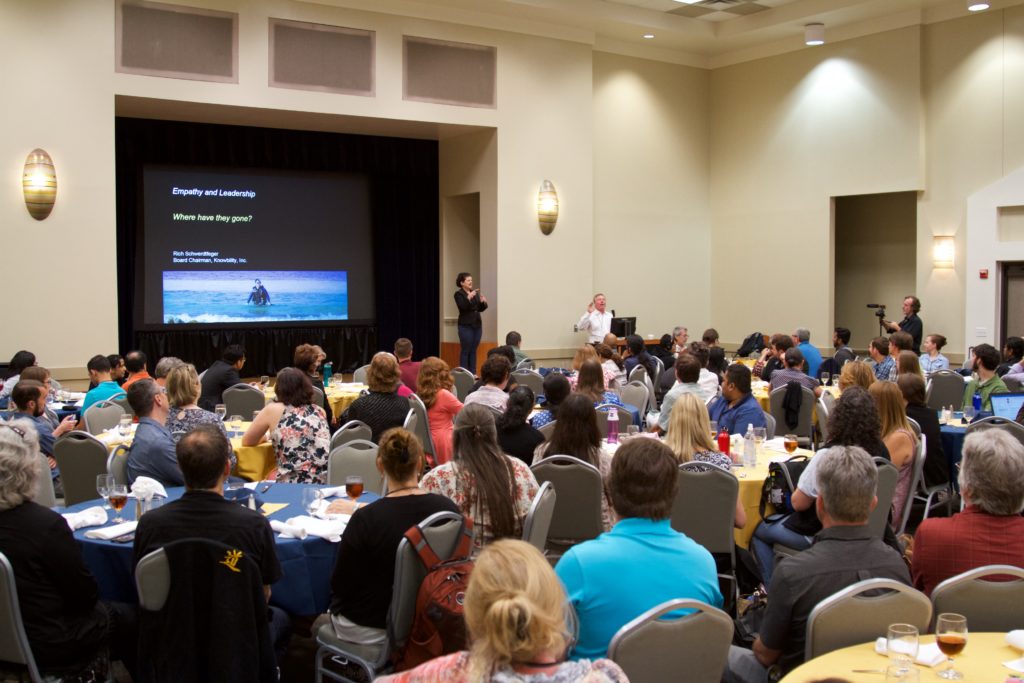 Knowbility’s board Chair Rich Schwerdtfeger spoke about the power of empathy to lead innovation in a keynote speech at the John Slatin AccessU 2017 conference in Austin, Texas.

Schwerdtfeger opened with a story from his early years at IBM. In 1990, when he first started working there, Windows, and its graphical user interface was beginning to replace DOS. At that time, there were no screen readers for Windows, and many in assistive technology feared what would happen if none were developed.

In 1993, IBM developed Screen Reader/2, which paved the way for other Windows-based screen readers.

Schwerdtfeger’s keynote focused on his role in developing Accessible Rich Internet Applications (ARIA), a technical specification that helps make dynamic web content accessible to people with disabilities. Just as Windows’s dominance created the need for a new kind of screen reader, the rise of web applications about 15 years ago presented a barrier to equal access to the latest software. Schwerdtfeger explained how empathy served as a catalyst for solving this accessibility challenge.

“If you don’t feel for the people that you’re serving, you don’t see the problems that need to be addressed,” he said. “Once you have insight, it leads to innovation and that’s the motivation for change.”

From the beginning, Schwerdtfeger and his team decided to make their work open source. Despite Microsoft’s great market share of the browser market, IBM collaborated with Mozilla, the maker of the Firefox web browser. Schwerdtfeger’s team approached the World Wide Web Consortium, an international organization that sets standards for the Internet, shared code with other tech companies such as Google, Apple, and Oracle, and worked with vendors of assistive technology to ensure that web applications would be accessible.

By 2014, ARIA was incorporated into HTML5, many previously inaccessible websites and web applications were accessible, and developers now had a blueprint for creating accessible dynamic content. IBM’s leadership led to another milestone for accessibility.

“We broke one company’s dominance over the entire application space,” Schwerdtfeger said. “We created the first declarative accessibility API for the web. We grew the technical base of the entire accessibility community. We removed key roadblocks to the open web and ushered in new browser players that didn’t exist.”

Schwerdtfeger closed by outlining his current interest in making accessible technology for people with cognitive disabilities. He noted that as the aging population increases, the need for assistive technology aimed at older users will grow. He encouraged his audience to learn from the examples set by past leaders in accessibility and to use empathy to bring forth leadership that improves the world.

“Real leadership starts with empathy,” He said. “The leaders today need to change how they view accessibility. It’s time to go back to how we used to do this. Those that you aspire to be have already made the change.”

Schwerdtfeger has been Board Chair of Knowbility since 2013. He was the Chief Technology Officer of Accessibility for IBM and retired in 2016.

This class will start with the very basics of document remediation. We will work our way from start to finish to complete a full WCAG compliant document. We will cover: Language Specification/Page Properties, Common Tags, Alt-text, Reading Order, Headings, Hyperlinks, Lists, Tables, and Fillable Forms.