I am sitting at the gate in an airport, waiting for a flight to Vancouver, BC. I use a wheelchair and travel with a service dog. Today is the International Day of Persons with Disabilities.  I can't help but think about the changes that happened since this event officially started in 1992. 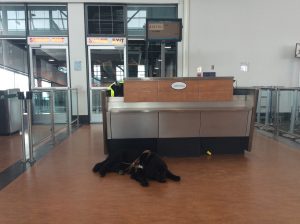 My service dog waiting for airport gate staff to arrive for boarding.

My first memory of something similar to that goes back to 1981. The United Nations declared that year to be the International Year of Disabled Persons. The theme was "full participation and equality". Again, have things changed since then?

I was just a kid back then. I can't assess what the situation was for people with disabilities back then. There's one thing that jumps to mind though: I already traveled a lot. I was flying between Canada, Europe, and Africa a fair bit from age five. And I have no recollection of ever seeing someone with a disability in planes. And a dog? No way! I'd remember something like that! So now, the fact that as a wheelchair user, I can fly and travel with my dog is quite a change.

There are, of course, still hassles. Things aren't perfect. For instance, most airlines won't allow me to do online check-in 24 hours before my flight because I travel with my dog. To say that's annoying and frustrating would be an understatement. But in the greater scheme of things, I remind myself that at least, they aren't trying to carry me on a plane in a blanket (something that happened to a friend of mine in the early 1990s!).

Things have changed on the web as well. I remember when the <img> tag appeared in HTML (yes, that dates me). I remember when the alt attribute appeared in HTML, three years later! We are indeed a long way since we've been able to associate alternate text to images. Technology has changed. In fact, it is constantly evolving. Standards have come ahead by leaps and bounds. And awareness is growing. Things are far from perfect, but they are better.

And Knowbility has been involved in that change for the last two decades. Without access to technology, so many doors are closed. Knowbility works hard to increase awareness to make technology available to all. One of the many ways we do this is through our OpenAIR rally: A web accessibility challenge matching non-profits to web development teams. Non-profits win because they end up with a great looking website that happens to be accessible. Developers win because they get to learn more about accessibility. And of course, people with disabilities win because more sites become accessible and more developers know about accessibility.