It’s a Friday in Austin. By any regards, it’s just another day in just another city. In fact, if you walked through downtown today, you would have no idea that little more than a week ago, one of the world’s largest trio of festivals flooded the streets with geeks, movie buffs, and music lovers alike. Knowbility was right in the midst of the chaos – taking the South by Southwest (SXSW) world by storm with our message of accessibility and having a blast doing it!

To start with, we hosted an official SXSW party on March 11th. If you know anything about SXSW, you know why that word “official” is emphasized. It’s a BIG DEAL. But let’s be real – the bigger deal is the reason we hosted the party in the first place: announcing the winners of the 2012 AIR-Interactive/AIR-Austin Competition and introducing the Dewey Winburne honorees for contributions to society through interactive media.

Seven teams competed earlier this spring in an intense race to accessibility. You might have read about the program, and the incredible teams that participated in our post-rally blog post. So who won? Everybody did – you just can’t beat participating in AIR! But since we had official judges, we probably should have official winners, and they are:

Congratulations to everyone who competed – you are all champions, and your work for accessibility goes far beyond the Rally!

Accessible Internet Rally Will be Held in October

If you didn’t participate in this spring’s program, you’ll have another opportunity in October, when we bring the AIR-Austin rally back to its traditional timing – during Disability Awareness Month. As we announced following the awards, Rich Schwerdtfeger, Chief Technology Officer for Accessibility at IBM Software Group  will chair the fall program! 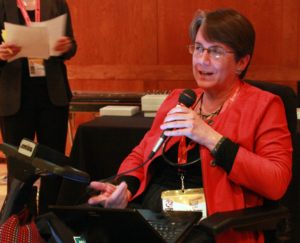 Local musicians Mother Falcon (silently accompanied by the ASL stylings of LotuSign) provided the background for a brief intermission at the party, and then the rest of the evening was dedicated to honoring the winners of the 2012 Dewey Winburne Awards. Dewey was a co-founder of SXSW Interactive, and a man dedicated to changing the digital landscape in Austin through his work with technology and youth.

Those awards,presented by SXSW itself, honor the work of 10 individuals from around Austin, the US, and even the world. The award recognizes contributions made by social activists using technology to change their communities. More about the honorees  can be seen in a great post about the Dewey Awards on the SXSW website.

Many thanks go out to Theresa Ferguson, who emceed the program, and did a fantastic job of introducing the awardees and moving the ceremony along. Theresa is not only a former participant in AIR, she helped to inspire the AIR-Interactive Awards, and she’s even a past Dewey Nominee!

Thank you also to everyone who came out to support the work of our fantastic Accessibility Internet Rally teams and the Dewey Award winners! Your enthusiasm and energy overflowed the room!

You’d think that after the party was over, we’d all get to relax and enjoy the festival, but there’s just no slowing down at Knowbility – instead, we were back downtown the next morning to welcome the first attendees at the annual SXSW Trade Show. We had a huge booth, like we always do, and had the opportunity to tell people from all around the world about accessibility.

Our "Wake Up to Accessibility" sleep masks were a huge hit - and were featured in a "best of SXSW SWAG" twitter post!

We also invited visitors to get off their feet, relax, and peruse the work of our teams, helping to select the People’s Choice Award Winner for AIR. We are pleased to announce that Team TradeMark has taken home the prize, a gift card for Parkside Restaurant in Downtown Austin, graciously donated by the restaurant itself!

Even more, the Knowbility booth featured demonstrations in using the JAWS screen reading software by Jeanine Lineback. Talks by Knowbility supporters and sponsors from Deque Systems, Adobe, Paciello Group, and the W3C highlighted issues and new developments in accessibility.

Speaking of sponsors, we want to thank them! Without their support, none of this would be possible!

And a special thanks goes out to The Chronicle of Philanthropy, who not only sponsored the 2012 Dewey Ceremony & AIR-Interactive Awards, but published a great article to highlight the Dewey Awardees.

Phew! It was a great week and now we are taking all the cool stuff we learned and will hope to share it with you at AccessU in May - see you then!