Nearly 200 people gathered to recognize Jim Thatcher's unparalleled contributions to technology access on May 17th at the CSUN Conference at the Grand Hyatt Hotel in San Diego.  The occasion was an award from Jim's peers to honor a life dedicated to ensuring technology access for people with disabilities.  Leading accessibility advocates and practitioners led by Preety Kumar, CEO of Deque Systems,  came together to share stories and remembrances of working with Jim.  People talked of how they had been influenced by Jim's brilliance, his passion and his deep commitment to equal technology rights for all. 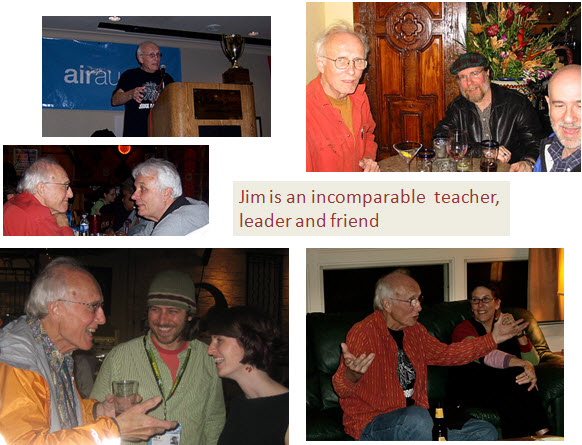 Rich Schwerdtfeger started the tributes with a remembrance of Jim's work at IBM.  His touching account of how Jim's work developing pioneering screenreader and other assistive technology for blind users at IBM, had seminal influence on Rich's own career and his dedication to the cause of technology equality.  And Rich made it clear that Jim's ability to inspire others was an key element in IBMs leadership position in accessible technology.  From the  very first screenreader technology through developing internal accessibility guidelines to HomePage Reader, Rich spoke of his pride in being part of Jim's team.

I got to speak next about Jim's post-IBM career - about his leadership as Vice-Chair of the Electronic and Information Technology Access Advisory Committee (EITAAC) that wrote the standards for Section 508; about the course he wrote on Web Accessibility for Section 508 for ITTATC; about his work as an expert witness in the Target and Amazon cases and as an advisor to the NY Attorney General's office regarding Priceline and Ramada Inn.  But mostly I spoke about Jim's inspiration at the grassroots level, about his work to make the Accessibility Internet Rally (AIR) such a vibrant way to pass the accessibility torch to the next generation of web professionals.

As young developers sign up to compete in AIR and realize that they will be trained and their entry might be judged by Jim Thatcher (!), it connects them to web accessibility far beyond legal mandates or questions of compliance.  I got to speak of the mighty band of Judge Brothers - Jim Thatcher, Jim Allan and John Slatin who guided the program development for so many years.

Jim is unfailingly generous with his time and his knowledge.  His passion is contagious and he infuses many with his fervent advocacy.  After IBM, Jim influenced young developers who took some of that dedication with them in their accessibility work for Apple, Google, Frog Design and many many other companies.

I told the story of meeting Kareem Dale, special assistant to the President on Disability issues and how, when he learned I was from Austin, Kareem's first question was "Do you know Jim Thatcher?"

Curtis Chong, former technology director at the National Federation of the Blind told of once telling him "Jim, you are the only sighted person I know who thinks like a blind person,"  and that Jim treats blind colleagues without pity or condescension but with a clear understanding that people are equal when given equal access to tools.

It is a rare and wonderful privilege to know and work with Jim.  It is also a responsibility.  This is so because Jim understands as few people do what Marshall McLuhan said about tools.

"We shape our tools, and thereafter our tools shape us"

Jim inspires us all to dedicate ourselves to work together to ensure that the information and communication technology tools that are transforming society are equally accessible to all.

Jim himself told the story of choosing the name "PC SAID" for his software invention and being dismayed when his boss chose "screenreader" instead.  More stories told by Andrew Kirkpatrick, James Craig, Lainey Feingold, Chieko Asakawa and others rounded out a picture of Jim Thatcher as a man who has profoundly shaped and continues to influence the field of information technology accessibility and who is enormously generous in sharing his vast experience.

In honor of Jim Thatcher a fund has been established at the Texas Audubon Society .  If you would like to help honor Jim, please use the link and be sure to put his name in the Notes section of the form.  And please share your own stories of Jim right here as well.