Knowbility was incorporated in Feb of 1999 – that makes us 18 years old this month. Much has changed since we dedicated ourselves to the mission of ensuring equal access to technology for people with disabilities. The Americans with Disabilities Act was only nine years old. Inspired by the civil rights movement of the African-American community, people with disabilities fought for and won recognition for equal opportunity to participate in modern life. In 1999 it was still unclear how the ADA, signed into law by the first President Bush, would apply to the Internet technologies that were transforming the lives of all citizens. But our community clearly understood the great promise technology advances held for those with disability and worked hard for full inclusion. Knowbility’s advocacy work has been supported and sustained by that promise. 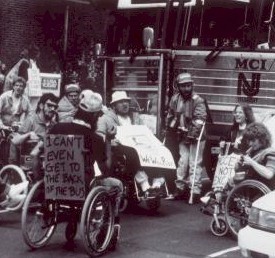 Archival photograph from Smithsonian exhibit on the history of the ADA. Veterans in wheelchairs gathered at a bus station. One has a sign on the back saying "I can't even get to the back of the bus."

Our federal, state, and local governments - reminded from time to time by citizen action - increasingly recognize that access to information technology is a civil right in the modern world. We have seen and been part of growing opportunity for people with disabilities to succeed as students, as productive employees, and as full participants in the social and political life of our nation.

The work is far from done however. As we start our 19th year, we take strength from what our community has accomplished – please read the following stories of some of those accomplishments by our staff and community colleagues. We also look forward as well to what comes next. In May, we will convene a group of leaders to consider those questions. Knowbility continues to offer training for web professionals, teacher training for assistive technology in K12 schools, earning opportunities for people with disabilities, and community programs in support of digital access.

On a national level, the US federal government has finalized the revised Section 508 regulations but other actions are less supportive. We may see a renewed challenge to the provision of equal treatment under the law. It is not reassuring that the White House has removed disability information about federal policy regarding people with disabilities, including technology policies, from its web site. In addition, a Department of Education website explaining the rights of students under the federal Individuals with Disabilities Education Act (IDEA) disappeared and was only restored after great public outcry. The confirmation of the Education Secretary was rockiest around the issue of the rights of students with disabilities and advocates are closely watching policy development. We also watched with dismay the confirmation of an Attorney General opposed to the inclusion of students with disabilities, who claims that such a policy has led to the “decline in civility and discipline in classrooms all over America.”

The ADA has increased the visibility of people with disabilities. It also has led to the reshaping of the physical environment and vastly improved communications access. The world is better because of it and we won’t go back. It is becoming clear that in order to go forward with success, we must rededicate ourselves to the notion that people with disabilities - regardless of age, social status, or physical location - have the same rights as all other citizens.  In the 21st Century that includes the right to equal access to information technology in schools, in commerce, in employment, and in all aspects of life. Knowbility is proud to be doing this work in the company of such dedicated, brilliant, and tireless colleagues and advocates, including you reading this here, today.

Thanks for all you do.

Want to understand how people use screen readers? Learn about the user experience with native screen reader demonstrations from Knowbility.