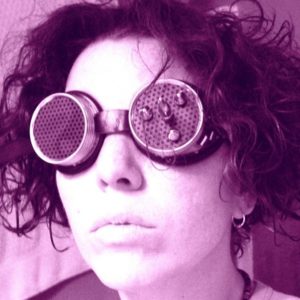 Elle Waters has put something new on the menu for AccessU: One part accessibility and one part video games, mixed together and served with a side of costumes for refreshing treat, available for a limited time only. Get a taste with the following 30-Second Interview, the second in our series featuring the presenters of the 2012 John Slatin AccessU!

My name is Elle Waters, and I work at a Fortune 500 health insurance company called Humana. I’m a web accessibility specialist. That’s my day job, but I’m also a huge advocate for grassroots accessibility awareness and education and part of the accessibility unconference movement – I think you can call us a movement. It’s gotten pretty big and is in several cities now.

What will you be doing at AccessU?

We have a 3.5 hour workshop targeted toward accessibility professionals in big business or government - places not specifically about the biz of accessibility. Wendy Chisholm (@wendyabc/www.sp1ral.org)  from Microsoft will be helping present somehow, possibly through Skype - she was the catalyst for this workshop. Our goal is to help people craft their accessibility message so that they can move it within the company for a better understanding of accessibility and then better adoption and better funding. We are going to start with a talk about video games…and we may show up in costume. This isn't going to be a dry presentation.

Costume? That’s awesome. So tell me, why do you care about accessibility anyway?

I care because I believe very much in equality on the web. It’s what I’ve been doing ever since I got involved on the web. I first got interested in virtual worlds; I loved how it provided a way for people in far-flung parts of the world to connect and break down barriers. I want to reduce barriers and make things accessible in the truest sense. I believe in freedom of the web, and I believe this is a civil rights issue.

What I’m really interested in lately is the research side of things. I’ve started getting more involved in understanding people with cognitive disabilities and how we can cater toward their needs. By lately, I mean just this week. I’ve also been reading about people with vestibular disorders, which I’d never thought about before, and I’m really excited to learn about it. I'm plumbing the depths of the not-so-apparent disability groups and figuring out what their needs are.

What would you tell people who don’t think accessibility should be a priority?

There’s a two-punch way of being able to talk to people. They either deal with it now or deal with it later. They either take a proactive approach and get to be a leader in the field, to be a herald of standards, and to take pride and ownership over the quality of their site. Or they can do it later. But then I tell them that the movement is already here, and a demand for equal access has already been established. Corporations can either be ahead of that wave, or swept away by it, which usually involves litigation or compliance issues. If you’re not thinking ahead, you’re going to be left behind your competitors.

I spend a lot of time talking to leaders in the corporate world, so this my “stump speech.” For other people, I talk more about the civil rights of accessibility and inclusion, but the corporate world isn't as interested in that.

Yes! I encourage people to go to AccessU because there are more interesting speakers, and I don’t mean myself, this year than any of the other years that I’ve seen, and I expect it to challenge people and excite them and really turn over what they think about learning conferences….like having costumes.

For a full serving of Elle's presentation, join us at AccessU on May 15 at 2:00pm. And learn more about Elle on her website www.ellewaters.com, or follow her on Twitter (@nethermind).

This workshop will focus on developing strategies and skills for making data visualizations accessible. The skills taught here will be broadly applicable. The content is focused so that the takeaways can be applied to many different contexts where data visualizations are created, from tools like Excel or Tableau to coding environments like JavaScript, R, or Python.